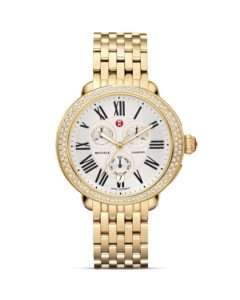 Did your favorite Michele watch stop ticking? We know the feeling, among our staff we have a few Micheles ourselves, but don't worry. WatchGnome offers premium online battery replacement for Michele watches and makes it fast, easy and affordable. Unlike other watch shops, WatchGnome handles the whole process for you without you having to leave your house.

You'll get your Michele Watch back in just a few days without ever having to leave your house!

Michele watches have only been known in the United States for a few years now that they are carried by large department stores like Macys and Nordstroms, but the story behind the Michele brand goes back to the 1940's. It started with the exquisite thinking of watchmaker Maurice Barouh in Belgium.

He was fascinated with watches and loved to build enticing watch designs. He saw watches as a sense of style as much as a way to tell time.

Over time, he passed on his passion and desire of creating magnificent timepieces to his son Jack. Jack operated in the Latin American area and quickly became known because of his individuality and dedication to every small piece of the watch that caught the attention of people in the area.

A few years later, Jack had his first child named Michele. At first they created children's watches so their daughter had a way to tell the time. He was originally doing this just for his daughter, but to his surprise, the watches were a hit.

The success from the Michele children's line got them interested. They decided to launch a company and their MW collection. In 2000, the third generation of Barouh's joined the company. In 2002, Michele and Jeremy Barouh followed and the company was going strong.

Watch Gnome is proud to provide servicing and care of such well manufactured timepieces.