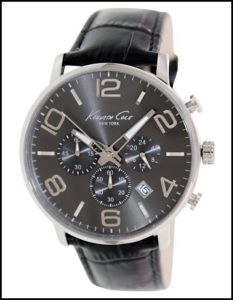 Did your favorite Kenneth Cole Watch stop running? Looking to see where you can get your Ken Cole battery replaced near you? We know the feeling, among our staff we have a number of Ken Coles, but don't fret. WatchGnome offers watch battery replacement for Kenneth Cole watches and makes it fast, easy and affordable. Unlike other watch shops, WatchGnome handles the whole process for you by mail without you having to leave your house. We handle the whole process by mail and get your Kenneth Cole battery changed and running like new in just a few days.

Get Your Watch Running in 3-5 Days | No Hassle!

Watch Gnome keeps our prices extremely affordable and they start as low as $20 for a basic watch battery change. That even includes the cost of shipping the watch back to you. Other shops charge upwards of $50-$75 dollars for the same watch.

Other companies lease very expensive locations to put their watch battery replacement shops. Think about those shops in malls, jewelers or upscale shopping centers. That's extremely expensive and they are forced to charge higher prices to cover that rent - regardless of how good their service actually is.

Watch Gnome totally changes the Kenneth Cole battery service model. Our workshop is located in an affordable shop neighborhood in Denver. This allows us to hire the best technicians and still give our customers lower prices because we pay lower rent.

Who Changes Kenneth Cole Batteries Near Me?

You may be able to find a local jeweler or watch shop that can change your battery, but you will have to drive to them and deal with the hassle of waiting and getting a Kenneth cole battery change estimate.

We also believe in simple, flat rate pricing - with no surprises. Order your service and we'll get your watch running again in just 3-5 days and back to your house. Watch battery replacement near you? We come directly do you!

Can I Track My Ken Cole Watch Battery Status?

Absolutely. If you order from Watch Gnome, we send you complete tracking emails to follow the shipping of your watch and it's battery change status.

Cole originally named the company Kenneth Cole Incorporated in September 1982 and and his plan was to showcase his new line of shoes during market week at the Hilton New York. However, he was unable to afford a hotel room or showroom to exhibit his new line, so instead, he borrowed a truck and requested permission from the City to park two blocks away from the Hilton Hotel in front of a fancy shoe building. However, he learned that permits were only granted to utility companies and production companies shooting full-length motion pictures, so, Cole changed the name of the company to Kenneth Cole Productions, Inc. and applied for the necessary permit to shoot a full-length motion picture entitled “The Birth of a Shoe Company”.

With Kenneth Cole Productions painted on the side of the trailer he borrowed, he opened for business on December 2, 1982, in front of 1370 Avenue of the Americas. They had a fully furnished, forty-foot trailer, a movie director, a rolling camera, models as actresses, and two NYPD police acting as his doormen. He rolled out the red carpet and allowed only a limited number of people into the trailers. During the 2.5 days he was on scene, Kenneth Cole sold forty thousand pairs of shoes. To this day, the company remains named Kenneth Cole Productions.

How To Change A Kenneth Cole Battery

With the proper training and tools the process is very detail oriented, but straight forward. When your watch arrives at our workshop, our professional technical will immediately inspect it for any damage, wear or issues. Once inspected, we will use a special case back tool to remove the Ken cole watch case back. These are usually a pop off or screw back. Although straight forward, doing this wrong could damage the watch case or internal workings. So be careful!

Once inside, we remove the old battery and replace it with a brand new Energizer or Sony. We give the watch a check to make sure your Kenneth cole is running smoothly and then clean the inside of any obvious dirt or debris.

We then seal your watch back to factory standards and give the outside a cleaning. Its important when sealing the watch to ensure all the gaskets fit correctly to ensure it retains its original water resistance and the inside movement is not damaged.

What Size Battery Does My Kenneth Cole Take?

If you send your watch to us, you won't have to worry about it, we double check the battery type and ensure it all works perfectly. The way to correctly tell can be done using any combination of a few different methods. (1) Inspect the battery you are taking out (2) The correct battery size is usually engraved on the inside of the watch movement in tiny numbers (3) Check with the manufacturer.

We offer multiple services for your Kenneth Cole watch battery replacement. All services are timely and cost effective.
View prices on our watch service types.

We provide service for your Kenneth Cole anywhere to you in the United States via our online watch battery service. From Seattle or Sacramento to New York or Miami if you’re covered by USPS, we’ve got you covered.